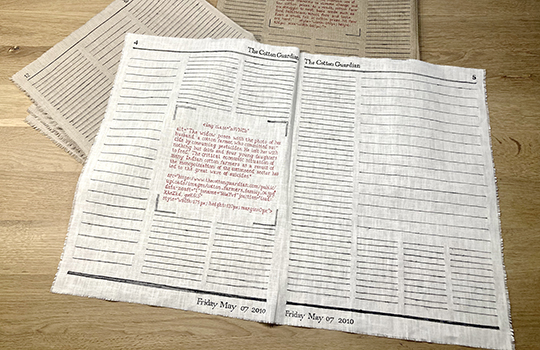 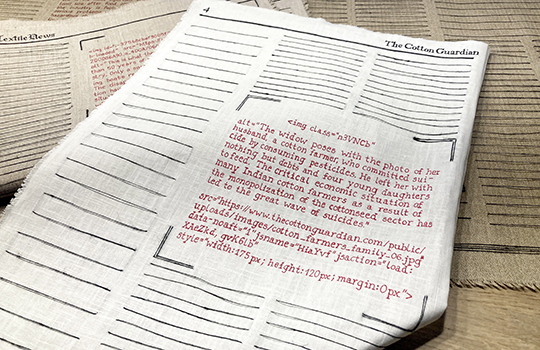 'textus linteum' is a work with hidden 'food for thought', specially made for the upcoming Textile Biennale in Rijswijk. As a visual artist I have been researching various social and historical contexts of textiles for over ten years. My focus often goes to the most invisible people in textile production. The theme of "food for thought" immediately reminded me of the connection between the food and textile industry. Both industries have an enormous impact on the environment and the people who work in them. Both drive consumption behavior, often with high quantity but poor quality items. Within the textile industry, I see cotton as the most problematic fiber. Fiber linked to slavery, growth of Western wealth and devastating impact on the environment. At the beginning of the chain there is still a very vulnerable group, namely cotton farmers. Their relationship to food is very basic. For many, growing cotton is the only way to make a living and provide for their families. Still, their incomes are often not enough to even buy food.


In 'textus linteum' I address their situation in the form of three 'newspapers' with hidden information. I invite the spectator to create their own image of their situation from the text alone. The codes, which normally are invisible behind any online photo, are used here as synonymous with the situation of cotton farmers. Their often hard life is behind every cotton garment which we wear. Anyone who thinks that this problem has been spurred on before and is no longer relevant is unfortunately wrong. Fair Trade and organic textile production has been intensively promoted for more than twenty years. Yet the problem is far from being resolved. Due to the very long and spread production chain, changes are implemented slowly and with difficulty. Painful elements in the chain are further away from the consumer than, for example, in food production. As a result, they are more often perceived as not urgent. But for farmers, the costs of growing cotton are often higher than the earnings of the yield. They are stuck in the international system in which large corporations sell GMO seeds and associated pesticides (higher costs), banks that strengthen loans (debt) or foreign governments that subsidize production and thereby push the cotton price down.


In this complicated situation I see a small solution in the use of other vegetable fiber. Such as linen with which this work is completely made.